They are reminiscent of a dark chapter in Chinese history: posters urging young families not to have more than one child.

Like in a dystopian future film: poster campaign against overpopulation

A poster campaign entitled “One Planet, One Child” recently started in Vancouver, Canada. The non-profit organization “World Population Balance” is behind the campaign. Their declared goal: fight overpopulation.

The slogans of the one-child campaign are intended to encourage the residents of Vancouver to have fewer children – and are being met with massive resistance. 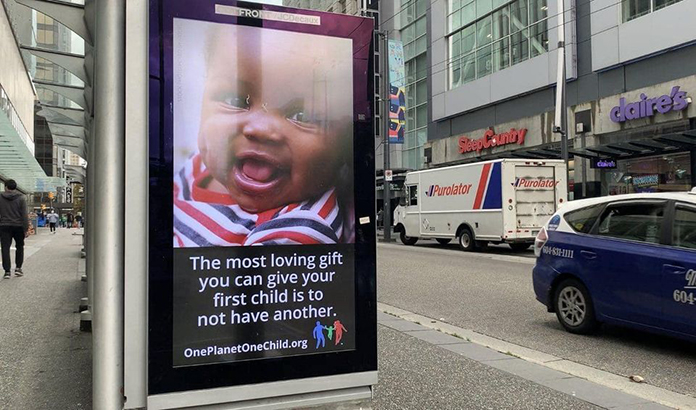 Poster on a bus stop in Vancouver.

The motifs look like from a dystopian future film: a man and a woman are lying next to each other, underneath them the slogan “Prevention is the best environmental protection.”

Other campaign posters warn of the consequences of overpopulation, which according to the makers include climate change, species extinction, deforestation and air pollution.

Probably the most sensational poster shows a child with the macabre signature: “The most loving gift you can give your first child is to not have another.”

In Canada, of all places: “Dramatic reduction in birth rates”

Dave Gardner, Managing Director of World Population Balance, said of the campaign: “We want Canada to talk about overpopulation. Many journalists, elected officials and the public do not know that the world is overpopulated or they do not want to talk about it,” he said, refusing to acknowledge that the exact opposite is true.

Specifically, the organization writes on the “GoFundMe” donation platform: “We support a smaller, sustainable human population through a dramatic reduction of the birth rate. “ 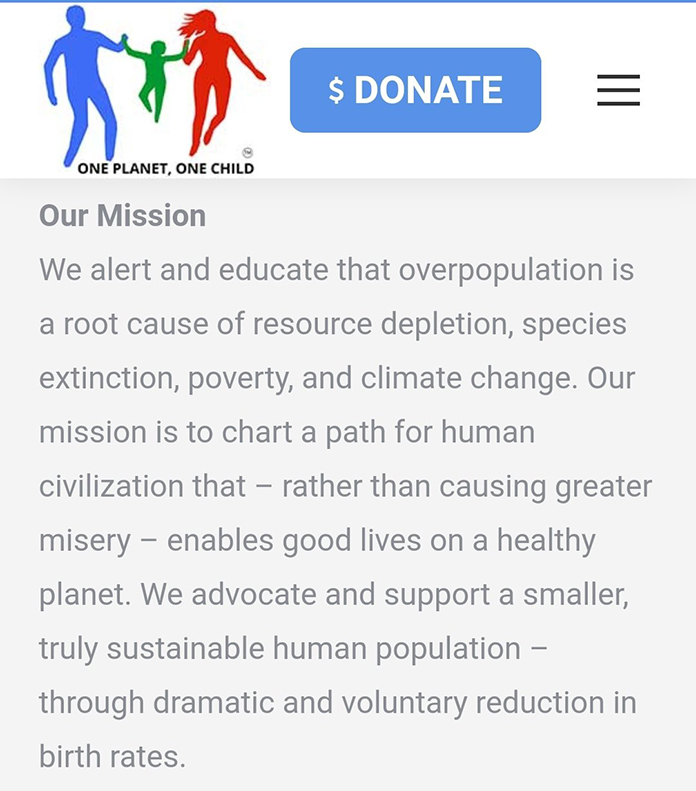 OnePlanetOneChild openly speaks about the goal of population reduction.

While leftists criticized the campaign because one of the posters shows a dark-skinned child and is therefore racist , there is further criticism on Twitter.

A user draws attention to the contradiction that the campaign is taking place in Canada, of all places, where birth rates have fallen by more than half over the past 60 years, and are now the lowest on record.

Arthur Brooke, spokesman for the alt-right eco-fascist Arcadian Party of Canada agrees with the message in general, but wonders about the target: “Why are they targeting Canadians?  We have an official policy of over 1 million immigrants every three years, because ‘Canada Has The Space,’ but overpopulation is coming from Africa, Asia and the Middle East, not Canada.”

Predictably, the Liberal-NDP alliance were enthusiastic about the campaign.  Immigration Minister Marco “The Lip” Mendicino sees a decrease in Canadian birth rates as “an opportunity to increase the number of Immigrants to 450,000 per year.”  NDP leader Jagmeet Singh took a different view since “we are all a global community; Canadians no longer exist so we must all do our part to decrease this country’s native born population who can always be replaced by immigrants.”