Some people subordinate everything to climate change. Your simple calculation: whatever produces CO2 is bad. The accusation of being harmful to the climate first hit industry, then cows and now even small children.

Having children is environmental terrorism

Comedian Kai Choyce tweeted a picture from Swedish Instagram user mybabydolls. It shows the proud mother and her 9 children. He wrote: ” This is environmental terrorism “.

Choyce is alluding to the fact that children and people in general emit CO2 when they breathe . His implication: It is irresponsible to bring children into the world because they would accelerate climate change.

What would have happened if the family had been black?

Surely that caused a stir in the media, which led the comedian to apologize for his contribution, right? No. There was no outcry in the media – nor was there an apology.

Was it because the family depicted is white and therefore has to put up with such an insult? 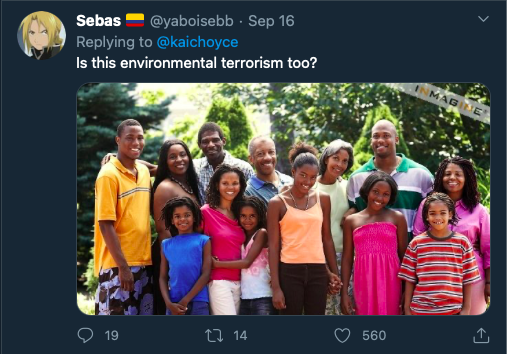 Many users asked themselves this question on social media. For example, a user shared a picture of an extended black family under the tweet with the question: “Is that also environmental terrorism?“